Bundle up and visit Edmonton’s outdoor art gallery! Freely accessible by everyone, public art engages the community and stimulates thought, feeling, and discussion. Plan your excursion around the numerous bike, skiing, and hiking trails through the river valley. 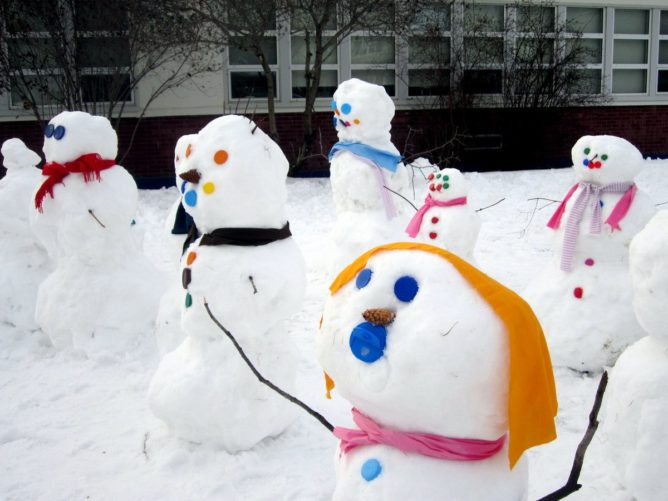 Winterscapes is all about awarding gardens, art, and play that takes place in the winter. Create a winterscape in your front yard, community hall, office/business building or school. A winterscape is a way of decorating your wintry yards and landscapes using snow, ice, natural objects and lights.

Looking for some creative winterscape ideas/tips? Have a looksee here.

The Winterscapes 2021 Photo Contest runs until February 28. Prizes will be awarded to the top 3 candidates in each category: 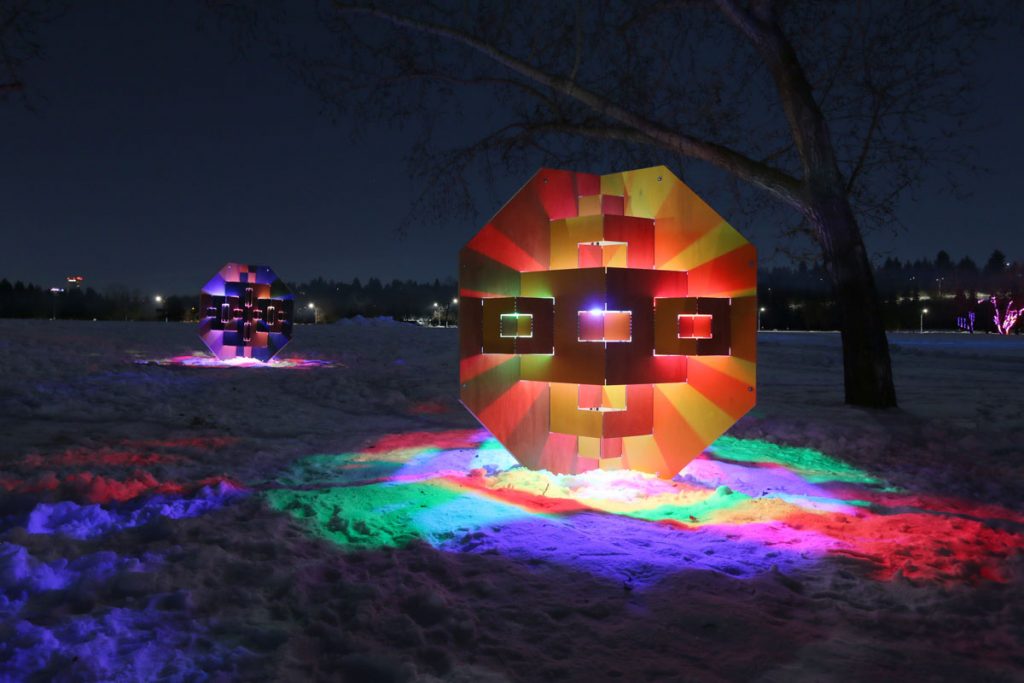 Artist Steven Teeuwsen finds visualizing geometric patterns as three-dimensional shapes extremely satisfying. These Crystal Lantern sculptures were inspired by crystal shapes and folded paper craft. The design process began with flat patterns on paper which were then folded to give them form in the fashion of a pop-up book. The resulting paper designs are then recreated at 10 times the size with hinged metal and wood. The resulting sculptures are intriguing during the day, but they take on new dimensions at night. Lit from inside, they cut the light into overlapping shapes that combine in unexpected ways.

Steven Teeuwsen is an artist, designer, and curator based in Edmonton, AB. He began creating installation art for festivals in 2013 at North Country Fair. Since then he has been creating murals, light installations, and fire sculptures for a variety of clients. Steven has also worked as a graphic designer for institutions, publications, and festivals. His curatorial projects include Notebook Magazine(2006-2010), Nextfest Emerging Arts Festival (2013-2019), and Lowlands Project Space (2020).

The Space Between is an interactive projection art display that invites visitors to meander through the spaces created between four projection mapped art walls. This installation showcases art photographed on the streets of Edmonton on one side and geometric patterns on the other, with a touch of whimsy tying the two worlds together.

Kalli Melenius is a visual artist and small business owner, currently living in Edmonton, Alberta. Kalli Melenius, Owner of Freebird Entertainment, is a passionate projection mapper, visuals artist, broadcast producer and video technician based out of Edmonton. She loves creating unique visual landscapes that take the ordinary and make it extraordinary. Pre-pandemic, Kalli was touring the world as a broadcast producer and with the band iVardensphere as their VJ and is currently working on creating new visual content for their upcoming album. She was also a busy VJ for events all over Canada. Changing pace in the post Covid world, Kalli is focusing her time on video production and working on her first original music album.

“Art processes build cultures of collaboration and creativity. Part of my legacy has been to create community driven and interactive art.” Ritchie Velthuis is a visual artist whose focus has been primarily sculpture in various mediums including ice and snow, clay, cement, found/recycled material and most recently bronze. His dedication to refining his craft was rewarded with Edmonton’s SCTV monument, Bob and Doug MacKenzie.

Daniel St-Pierre is an accomplished percussionist in Edmonton with a long history of stage and set design. Creating environments that inspire is a passion that he expresses through his music and detailed builds. He is the environment designer for The NestYEG in Edmonton and Freebird Entertainment. Daniel is also a session percussionist and is currently recording with his bands iVardensphere and Rellik. He has several releases set for this year, including his first world wide release on February 9, 2020 on Shimmer Johnson’s album “Inner Me”.

These art installations were made possible by the Edmonton Arts Council's Connections & Exchanges grant. Silver Skate is grateful for the opportunity to employ and support local artists thanks to the generous funding of the EAC. 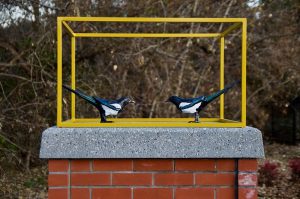 Take in the beauty of Rossdale Linear Park and enjoy The Magpies’ Nests sculptures. Did you know that Edmonton is thought to be the black-billed magpie capitol of Canada? The Magpies’ Nests considers the complex interactions between humans and nature as well as the concept of “home”. These magpies of the corvid family are known to be resourceful, loyal, and brave – much like human Edmontonians!

Stroll along Queen Elizbeth Road and happen upon mikikwan. The concrete sculpture is a reproduction of a 9,000-year-old buffalo bone hide scraper from the archives of the Royal Alberta Museum. The finished sculpture will memorialize the work of Indigenous women and the relation of that labour to the land. The sculpture also pays respect to the importance of the buffalo itself to the people living in this place, the communal aspect of its use, and its destruction with the arrival of Europeans on the Plains. 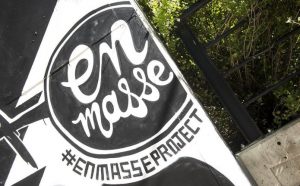 Take a bike ride under the 99th Avenue overpass and check out the En Masse Mural. The content and flavour of the En Masse wall was spontaneously defined by the many artists that participated in the creation of this work over the course of a week in production.

The artists, both emerging and professional, were coming from the ‘underground’ or ‘lowbrow’ arts (comics, graffiti, tattoo, and street art communities). 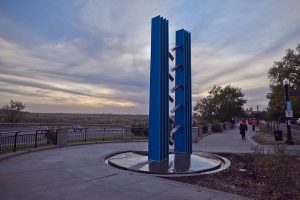 Located on Victoria Park Promenade, with some of the best river valley views in town, The Convergence comprises four steel spires up to 6 meters tall, a 6.2 meter waterfall, a bronze band of text drawn from the historical record, and hedgerows of native shrub planting. The Convergence embodies a convergence point for people and water - for the city and nature, and for the earth and sky. 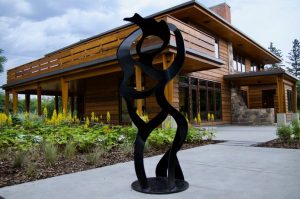 Located at Yorath House on Buena Vista Road, The Dancer is a human-scale abstracted representation of a figure in motion. The sculpture is based on an ink brush drawing. The artists intend that the sculpture imparts a feeling of thought, presence, and inspiration to the viewer. 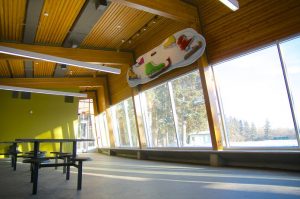 This bas relief mural celebrates a one of our favourite winter traditions – ICE SKATING!! The imagery suggests a pond where ice skates have come to race each other. Inspired by period skates as well as historical artistic imagery, the artist employs bright hues and detailing to instill a sense of motion. Observing speed skaters in action reminded artist Marc Siegner of large birds such as owls, eagles, geese, and falcons.

Situated in Hawrelak Park, this representation of pioneer motherhood features a mother playing with her small child in a universal and timeless throwing game, catching him directly over her head and lowering him for an intimate moment of touching foreheads. In addition to the motif of family and play, Tosczak intends to honour the courage and perseverance in overcoming the hardship and isolation of the pioneer experience by distilling the monument to the symbolically unified form of mother and child – an image that evokes a sense of hope for the future as well as a grounding in the past.

Check out this selection of Instagrammable Walls located just north and south of the river, themed around nature, outdoors, and animals. Take photos with beautiful backdrops, learn about artists and discover their artwork, and get outside to safely explore art during winter! Don’t forget to let us know you were there. Tag artists and us in your posts! @SilverSkateFest #SilverSkate and #IGWallsofYEG 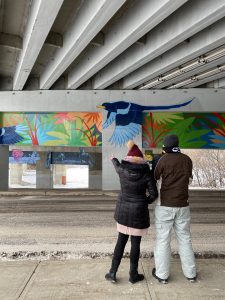 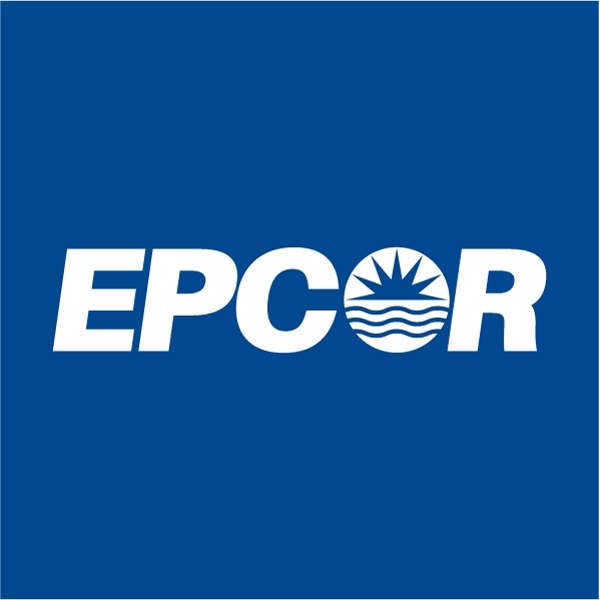 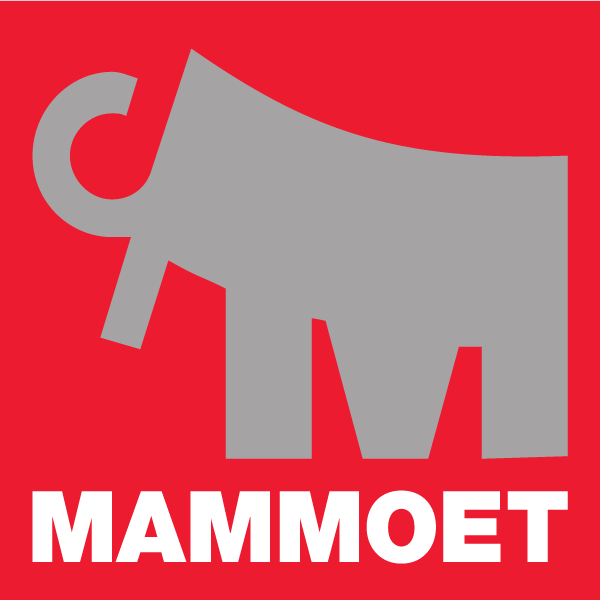 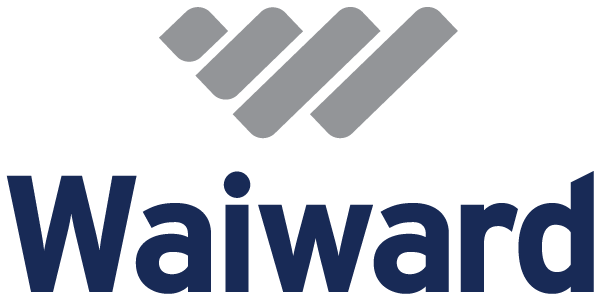 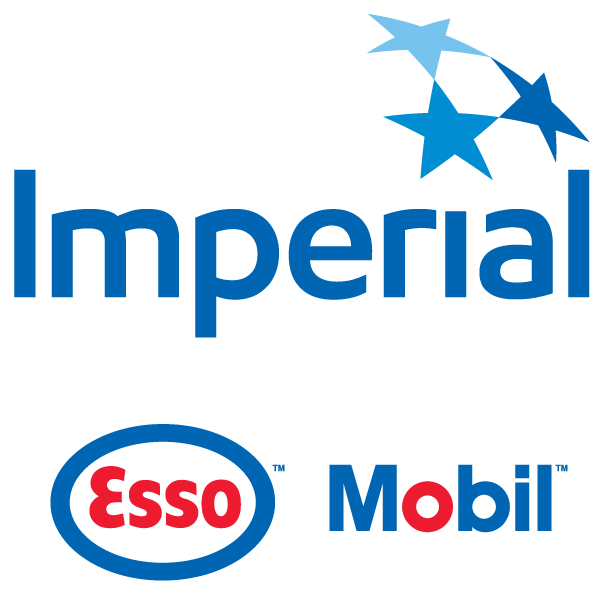 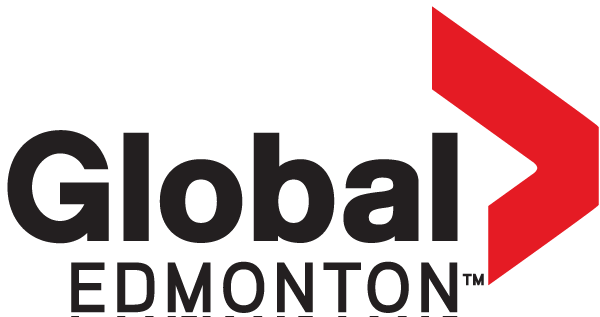