Made possible by the Heart + Soul grant from

Gather under the stars on our snow couches on the west side of the boathouse and enjoy these fascinating stories.

Indigenous families lived and survived the seasonal cold in various ways. Winter shelters were lived in seasonally and used as a place of meeting and to warm by the fire and visit. Cold days and nights became the best times to tell stories to one other and share experiences of adventures about hunting, trapping, fishing, snowshoeing, and wood gathering.

The stories were not just meant for entertainment, but to bestow a collective knowledge of life and learning to the young, as well as pass on the importance of ceremony and blessings. Through funding from the EPCOR Heart + Soul Fund, Silver Skate was able to hire a sound engineer and record stories from three elders which will be shared on location in Hawrelak Park between February 11-21 between 6am-11pm. The stories will also be available via download so we can all sit outside, star gaze, and listen to these incredible stories.

On this page:
(click to jump to a section) 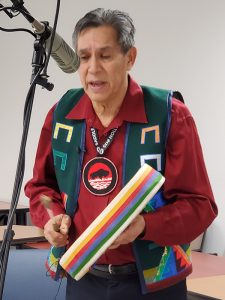 Elder Francis Whiskeyjack is a member of Saddle Lake Cree Nation and has been living in Edmonton for over 20 years. He has devoted his life to teaching traditional Indigenous values to foster understanding and reconciliation between Indigenous and non-Indigenous peoples. He is passionate about sharing traditional knowledge and teachings, providing council and mentorship, and promoting awareness of Indigenous ways of knowing, being and doing.

As a traditional person, he strives to walk a balanced, holistic path and live by the teachings handed down to him from his Elders, namely the late Joe P. Cardinal. Elder Whiskeyjack is fluent in the Nehiyawewin (Plains Cree) language.

A residential school survivor and an accomplished artist, musician and cultural teacher, he promotes the learning and retention of the Nehiyawewin language. He has worked for over 15 years as an elder and cultural advisor at Amiskwaciy Academy, and Edmonton public school board program of choice that provides academic programming within an Indigenous context and serves a large Indigenous student population. He works at Amiskwaciy to support students and staff but also works from Amiskwaciy to serve the boarder Edmonton community. He works daily to share cultural knowledge, provide guidance, and act as a mentor.

Elder Francis Whiskeyjack received an honorary doctor of laws degree on June 12, 2019. He regularly holds sweat lodge ceremonies and pipe ceremonies for youth at Amiskwaciy Academy and for people in the community. Invited to open and speak at numerous community events, he also leads and participates in numerous committees. He has served on the board of directors for Edmonton Fringe Theatre Adventures Society. In the past, he served as a member of Urban Aboriginal Initiatives and the City of Edmonton, a participant in the development of Edmonton’s Urban Aboriginal Accord, and a board member for the Native Friendship Centre and the Saddle Lake Health Board.

Elder Whiskeyjack has served as an addictions counsellor for youth with Poundmakers’s Lodge Treatment Centre, as well as a counsellor and traditional arts teacher for the Edmonton Public School Board. He has also participated at the Dreamcatcher Indigenous Youth Conference at MacEwan University for the past five years.

As an elder, his extensive knowledge about the Medicine Wheel, Indigenous culture and history, and traditional holistic healing techniques has informed the work of many educational and healthcare institutions, including the Edmonton Public School Board, Alberta Health Services, MacEwan University, Concordia University, and the University of Alberta. In 2010, he was appointed as an adjunct professor at the University of Alberta, where he also serves as a student advisor to the First Peoples’ House and as a Convocation Elder at graduation ceremonies.

Who Are You - Balance

Advice for the Next Generation 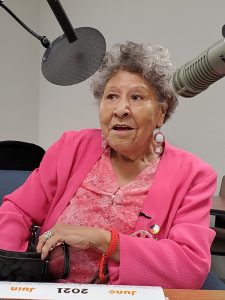 Elsie Paul is a well-known Cree/Metis traditional facilitator born and raised on Wolf Lake Metis Settlement and relocated at 2 years of age to Saddle Lake. Elsie acquired many teachings from Elders in the community.

Her teaching are based on respecting Mother Earth and all its creatures, spirituality and promoting harmony among each other. Elsie holds a Social Work Diploma from MacEwan University, an Addictions Certificate from Alberta Vocational Centre, Grouard and a Native Studies Certificate from Alberta Vocational Centre, Portage College.

Elsie also received the prestigious Esquao Award from the Institute for the Advancement of Aboriginal Women for her work with women in conflict with the law. Her most recent recognition was being inducted into the Delta Kappa Gamma Society International, whose mission promotes professional and personal growth of women educators and excellence in education. Elsie is also the founder and President of KohkomKisewatisiwin Society, whose main goal is to reclaim the traditional ways of Kohkoms of the past.

In my time of hopelessness and despair
I was granted a worthwhile choice of reaching for someone
... and that was God.
He gave me another chance to renew my dismal life.
But Oh I was like a stubborn child.
I fell to and fro, one too many times.
Life was really rough.
I cried and cried ... Why is life so mean?
"Is there really peace any where?"
I was heavily laden ... much, much too much.
Humbly ... "Give God the reins to lead!" ... cried my stubborn soul.
"Yes!" ... answered my wounded painful heart
And reached one more time for help.
He blessed me with another chance
to immerse in the beauty of his world.
Gradually I began to feel his healing power.
My mind ... My body ... My soul,
Began to feel the freedom of my past
And gently laid my pains aside.
He led me to better days
And to experience a sense of contentment
and ... Love
I can finally see and hear the beauty of His World
In my mind, my body, and in my soul.
A reminder that ... I just wanted to say
Thank You Creator,
for this chance of blessing
with my SOBRIETY 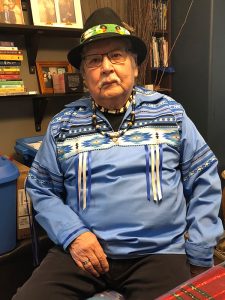 William Sewepagaham is from the Little Red River Cree Nation in northern Alberta and is fluent in the Cree language.

Growing up in the northern community, William learned about hand games, traditional games, legends-storytelling, hunting, trapping, the tea dance, and survival and ceremonial practices. He often shared these teachings with his students and community members and enjoys entertaining audiences dancing the Red River Jig and storytelling.

"I was mentioning about the Little People..."

"The first story is about up north, Wood Buffalo Park..."

"All these stories I'm telling today are very short..."

"A story about this elder in Saskatchewan..."

"This next story is about an Inuit story..."

"This next story is about a prospector..."

"All these stories I've told about the Little People..."

"This is about an old man, his name is Old Man Blackbird..."