More to come as music schedule gets confirmed! 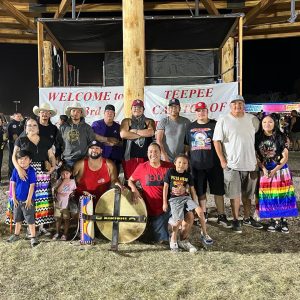 Formed in the winter of 2007, Cree Confederation has made and met their aspirations of becoming a recognizable Pow-Wow group across the Pow-Wow trail. With so many great groups that have encouraged and mentored this dream, the Cree Confedz have taken their place in the winner’s circle amongst champions. Wherever they travel, they represent the Cree people of the Treaty Six areas. It is with humble regard that they share the music and language of their grandfathers with a style that is a hybrid of Original and Contemporary styles of singing. Singing is their way of expression, our chosen way of sharing and spreading the beauty that is their Indigenous music. Cree Confederation won the 2011 Canadian Aboriginal Music Award for Best Contemporary Pow-Wow Album for their CD entitled Pakosíyimitán. 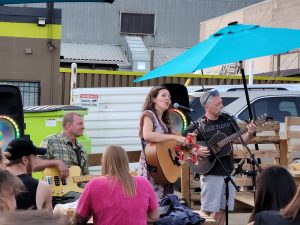 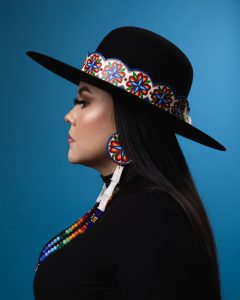 Fawn comes from the treaty 6 territory of the Saddle Lake Cree Nation, currently has three solo albums released and most recently is the inaugural winner of the best traditional artist or group of the 2022 JUNO Awards. On her journey of life, Fawn has developed a style of song that mimics her relationship with her people, herself, her family, and community. Her compositions draw upon her array of life experiences, She has been a member of cree confederation since they began and remains their only backup singer. 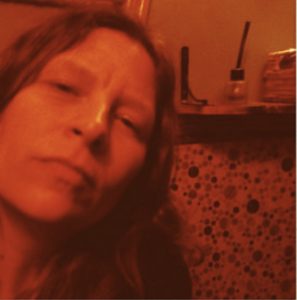 Jody Shenkarek and Hot Kindlin’ are thrilled to be stoking the fire at Silver Skate this year. 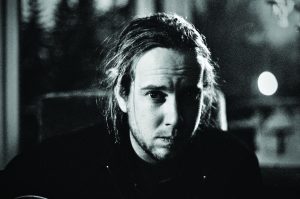 Joe Nolan, named by The Globe and Mail as “An Americana wunderkind to look out for,” shares Lost Verses, his seventh album – and fifth in just five years. During Nolan’s illustrious career he’s recorded with JUNO award winning producers Colin Linden and Hawksley Workman, has also won several Cobalt Prize songwriting awards at the Maple Blues Awards, earned a handful of BreakOut West nominations, and got a Canadian Folk Music Award nod for Contemporary Roots Album Of The Year for his 2020 release, Drifters. A typical year will see him playing anywhere from 150 – 200 shows; he is a true workhorse and road dog. Often framed as a lone wolf, Nolan self-produced Lost Verses, but called upon some friends to elevate the album. Key tracks feature Sarah Pagé on harp (Leif Vollebekk, The Barr Brothers), LA’s COULOU on trumpet and sister Nataya Nolan on background vocals. 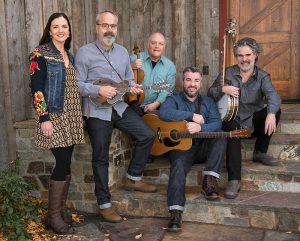 Like the powerful mandolinist and composer at its helm, John Reischman and the Jaybirds fashion a stylish take on bluegrass that seamlessly blends original songs and instrumentals with Appalachian old-time music for a truly unique band sound. Now in their 20th year, with seven acclaimed albums and two Juno nominations, the Jaybirds are simultaneously innovative and unadorned, sophisticated and stripped-down, happily old-fashioned and 21st-century contemporary. 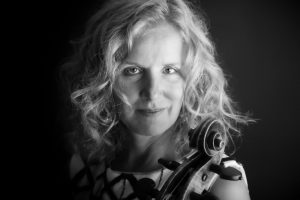 A versatile musician and educator, Josephine van Lier is equally at ease on historic instruments as on their contemporary counterparts. She, therefore, covers a wide variety of repertoire utilizing the endless possibilities that this range of instruments, string set-ups and bows allow her. Founding member and artistic director of Early Music Alberta, Josephine van Lier is a strong advocate for the historically informed performance practise of early music. Josephine thoroughly enjoys teaching cello, baroque cello, viola da gamba, cello ensemble and viola da gamba consort out of her private studio. She is the recipient of the “Celebration of Women in the Arts Award” from the Edmonton Arts Council. 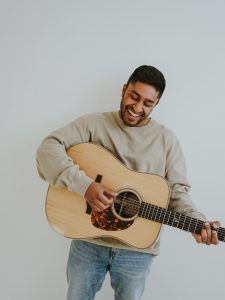 “When it comes to setting the bar high, Canadian r&b-pop artist Josh Sahunta never lets his feet touch the ground. Drawing upon his influences of John Mayer, Ed Sheeran and The Weeknd, Josh’s songwriting is packed with deeply rich narratives and cool, contemporary soundscapes. Josh has opened for the likes of Scott Helman and Joey Landreth, and he continues to perform across Canada, the US and Europe. Josh’s song “Take All I Am” was used on season 2 of the Netflix Original show The Order, and his song “Summertime” was used on the first season of Netflix Original Tiny Pretty Things. Josh recently also had 2 original songs placed in the third season of the hugely popular Netflix Original Love is Blind. Josh was also involved in the writing and singing on a major release by Sony India that has already amassed over 8 million views on YouTube. Josh has recently celebrated the release of his 2nd full-length album Mellowdrama and has had the opportunity to perform the new album on the main stage of the Calgary Stampede in July. “Josh Sahunta is one of those creative prodigies who excels at absolutely everything he touches.” – BK On The Scene 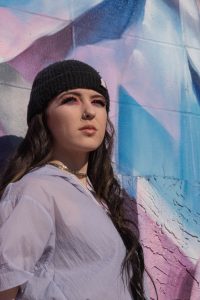 Third generation musician singer, Kat Zel has been studying and living in Edmonton the past eight years.
Passionate about the vibrant music scene in western Canada, Kat found herself the lead singer & song writer fronting the band Rareflower. During 2019, Kat continued to pursue her Indie career path while recording, songwriting, cowriting and gigging on a regular. As a hard working, multiple year nominee for the Edmonton Music Awards, Kat “has been delivering music for the masses with groovy beats, hooky songs, relatable lyrics and great musicianship. Her vocals are raw and edgy. She’s one to watch – that’s for sure.”, Rhea March of C.J.S.R. radio. CBC Music Challenge, Ottawa have compared Kat to “the next Janis Joplin”, and commented that “Her unique psychedelic sound will resonate with your soul, she will leave you mesmerized!” 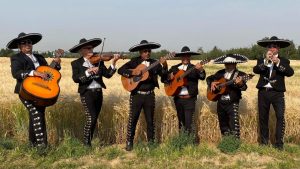 A collection of the finest Mexican Mariachi musicians from Edmonton Alberta Canada. 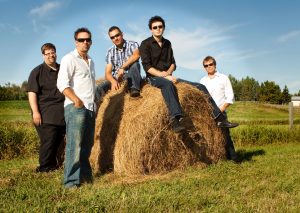 Millenia formally came into being in the year 1999 as a young, energetic group of musicians dedicated to both preserving and advancing Canadian Ukrainian music. They have performed countless times to countless thousands across North America. 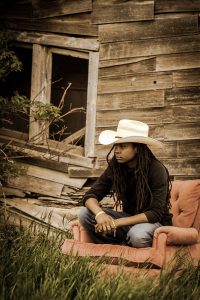 Nadine Kellman is an Edmonton based singer/songwriter, most notable for her work with her band, The Black Wonders, alongside some of Edmonton’s finest musical heroes: Billie Zizi (lead guitar), Ryan Funk (bass), Dana Wylie (keys), and Matt Blackie (Drums).

Nadine enjoys stage banter as much as she enjoys singing songs; believing that laughter and song are soul soothing. Playing solo is a unique way to connect with audiences and experience the intertwining harmonies of a contralto vocalist with her guitar.

“Silver Skate festival is a wondrous festival. It is one of the best ways to enjoy Edmonton’s river Valley and there truly is something for everyone” 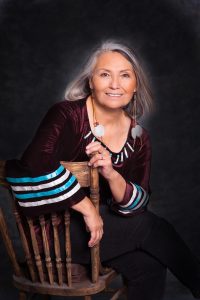 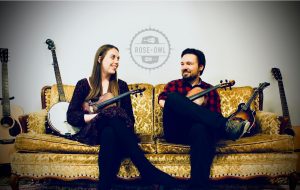 Rose (Claire Lecocq) and Owl (Jarred Albright) have been playing music together for nearly a decade. They have spent countless hours writing and arranging music and honing their ensemble both on and off the stage. A seasoned multi-instrumentalist and sideman, Jarred Albright has been performing all over the continent in a multitude of genres and applications. No stranger to the stage herself, Claire Lecocq has been playing and performing music since she was 6 years old, and has lent her vocal talents to numerous recordings. Rose + Owl is the latest culmination of their favourite styles and influences and draws from their shared love of Old-Time, Bluegrass, Western Swing, Americana, Folk and Roots to create a polished and uniquely unmistakable sound. 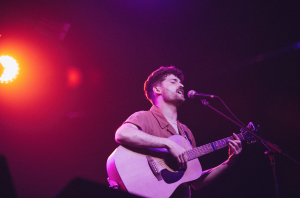 Lifelong record collecting has left Sammy with a facility for old-fashioned melodies combined with lyrics that are entirely present and personal. Imagine if Roy Orbison and Townes Van Zandt co-wrote a pop song – weird – but it kinda works. Sammy’s debut full-length album “Be Alright” is an 11-song collection that combines pure twang with Brian Wilson-esque ambition, all tied together by a voice as supple and entrancing as any heard in recent memory. The album debuted at #1 on the CKUA Top 30 Albums Chart. First single “Weather Report” caresses the ear like a dual homage to Roy Orbison and the great Brill Building songwriters, while capturing Sammy’s almost cinematic approach to making music. Recently, Sammy opened twice for Mariel Buckley and has enjoyed feature interviews on the CBC and CKUA Radio networks. 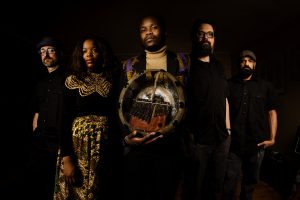 Playing music out of Zimbabwe, by way of Edmonton, Alberta, The Mbira Renaissance Band delivers an afro-fusion sound like no other. The group combines the mbira and other traditional instruments with contemporary sounds to produce a rich blend of vibrant polyrhythmic sounds. The result is an upbeat blend of the contemporary mbira sound with hints of reggae, afro jazz, and afro pop – inspired by the sounds of artists such as Oliver Mtukudzi, Thomas Mapfumo and Chiwoniso Maraire. Twice nominated for the Edmonton Music Awards in the World Music Category, The Mbira Renaissance
Band has been a feature in Western Canada for the better part of the decade. The band’s second EP, Famba, is available on all streaming platforms. Band members include Chaka Zinyemba (mbira,vocals); James Stuart (bass); Chi Zinyemba (vocals; hosho); Geo Koufogiannakis (Guitar); Munya Vialy (Keyboard); Steve Atkins (Drums). 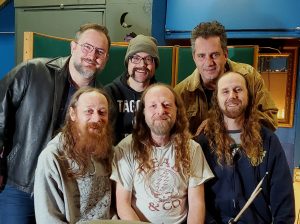 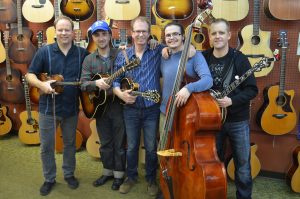 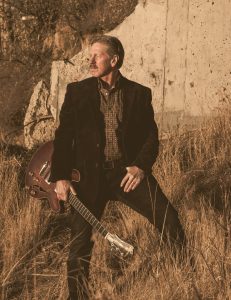 Originally from southern Alberta, veteran soldier Tim Isberg is an accomplished singer-songwriter. From Rwanda to Afghanistan, Tim experienced the real-life challenges while deployed in different cultures and conflicts amid the best and worst humanity has to offer. As a performer, he has entertained audiences in many corners of the world. Tim is a story-teller who brings a Americana blend of well-crafted Alt-Country, Roots and Contemporary Folk songs to the stage and a unique and endearing array of life experiences he shares in a way that makes each listener feel connected. Nominated as ACMA Male Artist of the Year, Tim’s album ‘Tears Along The Road’ recorded with Grammy nominee and celebrated JUNO award-winning producer-engineer Miles Wilkinson was selected by Music Canada as one of the Top 25 favourite Albums of 2015. His latest album, Running On The Edge was nominated as Top 5 Best Album of the Year by the ACMA in 2019. 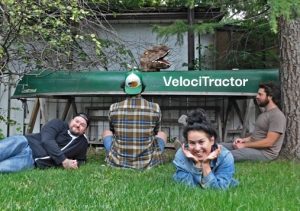 VelociTractor is Cretatious folk-rock; inspired by the idea that a giant asteroid never actually hit the planet and dinosaurs evolved to be the dominant species on Earth. The creative collaboration of four friends who played the same St. Patty’s gig 3 years in a row, hatched like a dino egg, and the aftermath of lightyears of musical experiences and a united love of Jurassic Park. Influenced by bluegrass, country, folk, and rock, you don’t have to be afraid of these friendly harmonies, outrageous lyrics, and Raptor-driven theme that is, VelociTractor.
VelociTractor is: Tiff Hall, Darryl Matthews, Shane Ducharme, Daniel Bourbonnais 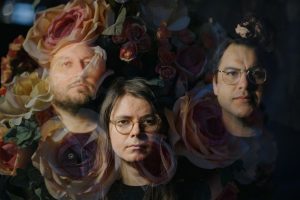 The Wild Rose Old Tyme Fiddlers Association exists to encourage, foster and develop an appreciation of Old Tyme Fiddle Music in a spirit of friendship, and to preserve this musical heritage for our generation and for future generations to enjoy. In addition to keeping the dancers happy at the Kingsway Legion bi-weekly, and playing at various local seniors’ facilities throughout the year, we also provide groups of fiddlers and backup musicians for a variety of events.